Cool Story - God has a plan!

Before I share the story, let me announce our official October numbers:

#49 girl
#36 boy
We didn't get our numbers this time until October 28th.  That is REALLY late!  We are glad to see a little movement, but are praying for more during the month of November.  We really thought we would at least have a referral by now.  It seems crazy to think that we could be waiting for "J" another 9-12 months.  Things are moving slowly without a clear reason as to why.  The courts closed in Ethiopia mid-August through October.  Now that the courts have re-opened, hopefully things will start to move again.   Unfortunately, even before the government shut-down, there wasn't much movement.  If I allow myself to think too long about it, I get so sad!  So - I have to just press on and turn it over to the Lord.  HIS timing is perfect and I pray for patience in the waiting.  We will have to start re-doing some of our paperwork as some are time-sensitive and may expire soon.  We know the wait will be worth it once we see our precious "J".  Please pray for our journey!
OKAY - here is the cool story of God's divine providence in our lives. 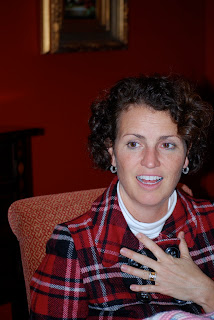 My reaction as my Mother-in-Law tells the story
As our family sat around the table on Christmas Eve 2010, my mother-in-law, Marilyn Dill, tells us that she has something to give us.  She begins to tell the story of her mother, Mary Valentine (aka GiGi), crocheting baby blankets for all of her great-grandchildren.  GiGi never met her great-grandchildren in this life, but made baby blankets that she gave to Marilyn to give to the children as they were born.  I have treasured both Evanne's and Watson's blankets.  David's brother, Chris and wife, Michelle, also have two children that have each received blankets, as well.  Marilyn gave each blanket to each child upon birth, knowing that four blankets is all that her mother had made before she passed away in 1993.  We announced our plans for adoption to the family in August of 2010.  When my mother-in-law was pulling things out of a drawer to decorate for Christmas, she discover another baby blanket that her mother had crocheted!  Marilyn had been rummaging through that same drawer for years, unaware that another blanket existed.   She did not remember her mother making "five" blankets - but there it was - just for "J"!
God's plans are not our own.  He provides before we know ourselves what we need.  Now "J" also has the inheritance of a blanket from his/her great-grandmother, who in her divine wisdom made one more "just in case".  How awesome is that?!?!? 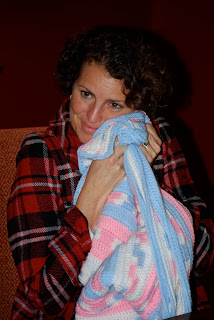 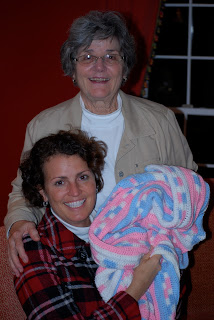 Ashley
Posted by Ashley at 1:11 PM

Ashley
God has poured out blessings upon my life. I have been married to a wonderful man, David, for 20 years! We have two wonderful children, Evanne and Watson. Our journey to J has begun!